You’ve read about it in magazines, seen it on television and probably know at least a friend or two who has used it – and now the popular Uber car service has arrived in coastal Delaware!

Having received national and now international acclaim for it’s alternative to other means of mass transportation, the Uber service is the first service of it’s kind and one that's been copied many times over, with various levels of success.

The service is currently being used in most major cities throughout the United States, as well as in several countries around the world. It’s here to stay, and now it’s also available here at the Delaware beaches.

If you’re unfamiliar with Uber and not sure how it works, here are a few things that you need to know:

To learn more about the Uber service and how it works, watch this YouTube video that includes all you need to know about this popular car service.

And for entertainment purposes only, and for a good laugh or two, watch this clip from the Jimmy Kimmel show that features Jimmy becoming licensed as an Uber driver and taking his unsuspecting fare on the ride of his life.

In coastal Delaware, the Uber service is now up and running, joining the greater Wilmington and greater Dover areas as locales currently utilizing the service.

Here at the Delaware beaches, the coverage area for Uber runs from Lewes in the north, all the way to the Delaware state line in Fenwick Island, and circumvents the eastern half of Sussex County, basically along the Route 113 corridor.

That means that if you’re in Rehoboth Beach and you need a ride to Dagsboro, your Uber driver can take you there. Towns included in the most recent Delaware service area include all of the coastal towns along Route 1, along with Selbyville, Dagsboro, Long Neck, Millsboro and Georgetown. 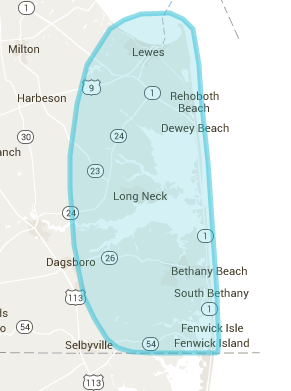 At this time, the town of Milton, though considered coastal Delaware by most locals, does not fall within the approved Uber service area in Sussex County.

In many cases, your first Uber ride is free, so be sure to check for any specials the company is currently running. And give Uber a try!

It might be for you, it might not. But it’s another good option for getting around coastal Delaware during the Summer of 2016 and beyond.